For: Those Who Starve

Posted by gbfontenele on September 21, 2016 in Plays in Performance, Uncategorized

Sarah Kane’s Blasted is unpleasant — at the very least. It stars addiction, emptiness, guilt, brutality, rape, suicide, and in case this list isn’t enough, the eating of the organs of a dead baby. It is ugliness tightly wrapped into a 90-minute play. A punch at the viscera (and one very well-orchestrated by John Kuntz at The Calderwood Pavilion at the Boston Center for the Arts, produced by Off the Grid Theatre Company). So, given Blasted’s many repugnant moments, how come I walked out of the Calderwood feeling as if I had witnessed something beautiful? 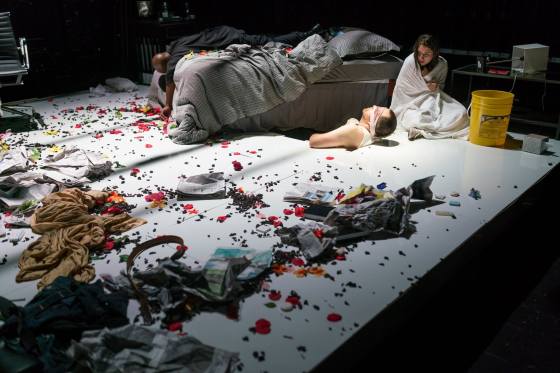 The play is set in a luxurious hotel room amidst a war zone. Ian (played by Christopher James Webb) and Cate (Alexis Scheer) have come to the hotel to be together after sometime away from one another. There is an obvious need for each other, one may even call it love, but there is also hate. There is rapid-fire dialogue between the two throughout, at times yielding snapshots of each character’s life and snippets of who they are: Kate’s father has recently returned from what may have been a prolonged absence, her brother has a learning disability, she likes “football” (soccer, to us Americans), she does not eat meat, is not afraid of death, and believes in God. Ian is a journalist who reports on society’s atrocities, he’s done some ugly, but necessary things for his country, he’s Welsh, loathes “football”, is afraid of death, and does not believe in God. While Cate is no longer in the hotel room, a third character, Soldier (played by Maurice Emmanuel Parent), shares time with Ian, recounting the grotesque things he’s seen and done in wartime. All characters are starving throughout. And the hotel room is no sanctuary; the war very much enters through its porous walls.

Once the show was over, I stumbled out of the boxing ring, my mind fixated on the recurring presence of starvation in the piece. Ian orders a sandwich for Cate and himself when they are starved. Then he orders two English Breakfasts next time they’re starved. And whenever Ian is not eating he starves for cigarettes and/or gin. When he’s not starving for food, cigarettes, or gin, he is starving for Cate, shown through his repeated pleas to make love to her. The baby whom Cate has taken off the streets cries from hunger, and dies, most likely out of starvation. Once the baby is dead, Ian eats a piece of its organs out of intense hunger. In another instance, when Cate is starving she goes into the war zone in search of something to eat. She returns with a measly piece of bread and shares it with Ian. And the Soldier asks Ian three times if he has any food to spare. When Ian finally gives in, the Soldier eats as if the food in front of him will vanish. So why all this starvation? Is it only for food? Or is it for something more? Is it a deep-seated hunger for connection? Empathy? Warmth? Intimacy? Understanding?

I walked out of Blasted knowing I had seen something beautiful because it’s a play for those who starve, and don’t we all…?

You may find more on Off the Grid Theatre Company @

Director and dramaturg in training. Free spirit and questioner from the beginning.

← Why My Ego is Killing My Art
Man Digs a Hole and Blames the Internet. →