Posted by rmrees on February 15, 2015 in HowlRound 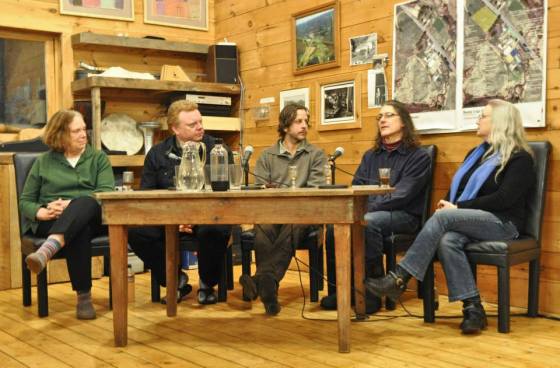 A Conversation Between Two Ensembles- photo by of Double Edge Theatre

I was recently watching a conversation between Anne Bogart and Leon Ingulsrud of the SITI Company, and Stacy Klein, Carlos Uriona, and Matthew Glassman of Double Edge Theatre on the HowlRound TV archives. Towards the end of the conversation, an audience member asked a question about how to excite and engage others to create a space where artistic work that is in dialogue with the world is possible. Anne Bogart responded saying that she’d observed throughout the years, that Double Edge has been successful in this way through their ability to adapt to their surroundings and circumstances. They are always changing.

Founder and one of Double Edge’s Artistic Directors, Stacy Klein, responded that over the past twenty years of the company being in Ashfield, MA, the survival of the company has relied heavily on the question of survival itself. What do I really need to do to survive? In the beginning, Double Edge was not widely accepted by their surrounding community, so they had to ask, how can we share our work and connect with these people? Or as Anne Bogart often asks in her work, how are we getting along? Through asking this basic survival question, Double Edge waas able to objectively see the ways in which they weren’t connecting to the community, and tried something new. Now in 2015, Double Edge is strongly rooted in the community that once questioned them, and it has been an essential part of their survival.

This conversation got me asking questions of myself—how can I survive as a human being, without having to sacrifice being an artist? Can I survive as an artist without sacrificing my basic human needs? How can I be both fully human and fully artist, and not only survive, but thrive?

As my undergraduate days grow fewer and fewer, the realities and responsibilities of “real life” begin to sink in. The question of how to support myself financially now looms over everything I think of doing, and it’s terrifying. As much as I never want to make money a top priority in my life, I know I can’t entirely escape the system if I want certain things, you know, like food and shelter. On top of that, going into a field that is infamous for its lack of money is a little worrisome. I know that to make a living as an artist will be difficult, and I am prepared for it—I’ve chosen it—yet, there are still so many unanswered questions like…how?

During the conversation, a question was asked about how to get money to support your work as a theatre artist–is there an alternative to constantly asking others to give you money?  Carlos Uriona of Double Edge answered, “The thing is not about money…the problem is how we think about money… It depends on how you organize and how you structure yourself… Each person, each art needs to have their own how—I cannot give you my how, you need to find it—It’s a part of your art.”

How can I make money is really just another version of, how can I survive?  Perhaps the problem when thinking about money is separating it from the other factors involved in life.  How can it all be interconnected?