Posted by rmrees on February 9, 2015 in Plays in Performance

I mean, have you seen her hair? 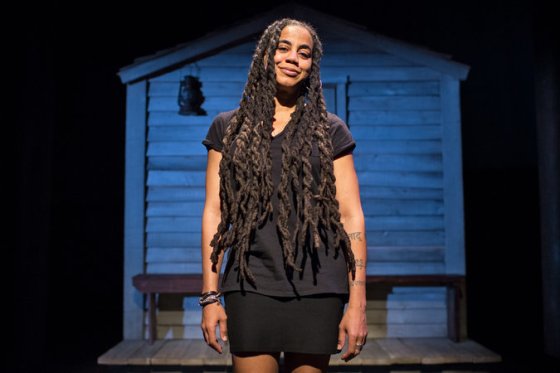 But in all seriousness, if you’re not already familiar with this brilliant, clever, down to earth playwright, you should be. Yesterday, I went with three other women in my Contemporary Drama class at BU to see Father Comes Home from the Wars (parts 1, 2, and 3) at the A.R.T. in Cambridge, MA. I was excited to see her work live after only having read her plays in class. This is the first part of what will ultimately be a series of nine plays addressing war and African-American history, among other things.

In this play, Parks seamlessly weaves in elements of Greek epics to tell a story about an African-American man named Hero who leaves home to fight with the Confederacy in the Civil War at the promise of freedom from his “master,” a pompous white slave owner. By the end of the play, Hero returns home with a new name, Ulysses, and like Ulysses in The Odyssey, his homecoming is not without a handful of deaths. Hero is a good, honest, hard-working man, yet in the way of the Greeks, he is tragically flawed.  The play ends with news of the Emancipation Proclamation, and simultaneous feelings of relief–things might finally get better–and the uneasiness of knowing that while we are far from slavery today, too much racism and turmoil still thrives.

After the performance, we were lucky enough to stay for a panel discussion with playwright Suzan-Lori Parks, Director of the Hutchins Center for African and African-American Research at Harvard University Henry Louis Gates, and Historian Eric Foner.  One of the main conversation topics was the question of historical accuracy in theatre and other art forms.  While the two men bantered back and forth, touting their highly educated opinions on the matter, Parks sat listening and ready to respond with the voice of an artist.  Of course in writing Father Comes Home from the Wars, she had done extensive historical research on such subjects as the Civil War, slavery, etcetera.  But the point is that art is not history.  Or is it?

So many times as artists, we build up a structure and create rules, so that when the time comes, we can break them.  If you’ve ever read any of Parks’ works, you know that nearly every sentence is dripping with some deeper meaning.  This play is no different.  Her knowledge is clearly and cleverly layered into the text.  Parks constructs the rules of this play, building a black and white fortress of historical truths–and fills the rest in with vivid colors of her own choosing.  There are inferences.  Using what she knows to be true, Parks writes the unwritten stories of a group of people who very well might have existed.

Sitting between these two prominent scholars, Suzan-Lori Parks stood out.  While history is important, it needs art to challenge it, feed it.  What if things didn’t happen exactly as we thought?  Whose stories went unwritten?  How many voices haven’t we heard?

As we move forward, these are the questions we need to be asking so that we can maybe avoid mistakes our ancestors overlooked.  And we need artists like Suzan-Lori Parks to remind, inspire, and incite us.