A Response to Fresh Ink’s Production of Handicapping

Posted by oliviahaller on March 22, 2014 in Plays in Performance

I walked into Fresh Ink Theatre Company’s production of Handicapping by James McLindon with an entirely different idea of what it would be than what it was. Since it was called “Handicapping” and I knew it featured a disabled character, I assumed it would be a drama about the experience of being disabled. Before the play even started, I looked at the set and conjured up a storyline. There was a small, cramped bathroom with no railing, a large step into another room, and a ticket window with a tall counter; all of which I assumed would establish an able-normative world and set up obstacles for the disabled character. However, the play wasn’t about that at all. Instead, the “handicapping” reference was most directly tied to the term as it is used in horseracing, as the plot features a group of friends betting on horses in order to change their economic situation for the better.

Of course, the term carried multiple layers of meaning in the play. Each character possesses a handicap that prohibits them from getting what they want and causes them all to commit some form of self-sabotage by the end of the play. But I think the aspect of the play that struck me the most, and pleasantly surprised me, was how the character of wheelchair-bound Vin’s disability was not his true handicap. Instead, his selfishness and immaturity were what nearly caused him to sabotage his relationship with his best friend, which provided a more compelling drama than watching the character be inhibited by his physical limitations. 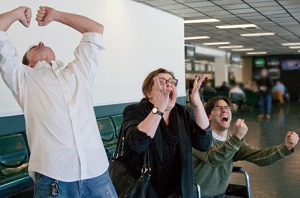 In general, I appreciated the way Vin was both written and acted. One reviewer from the New England Theatre Geek summed it up best when with this quote: “Alexander Roy deserves major kudos for his portrayal as Vin. Not because Roy is in a wheelchair. Not because Roy played his character with dignity. No, he deserves appreciation for his role because he played Vin as a person. Vin is an immature, deeply selfish jackass still living his high school days. He is also in a wheelchair. It is intensely satisfying to see a member of the disabled community portrayed as just a person.” This choice to me is reminiscent of John Belluso’s plays in that it does not ask an audience to pity disabled characters. Being disabled is not a character trait; as Belluso once said, “it is the one minority class which anyone can become a member of at anytime.” This play was an example of portraying a world in which some inhabitants are disabled, but their lives do not have to be solely about that. I feel that I do not see that choice enough in art, and it was refreshing to see this production handle it so thoughtfully and skillfully.

← Obsession with Flicks
THE FLICK: some really, really great theatre →